I got Caleb… calebwong.com and calebwong.org…
Happy Birthday Caleb!
-Jeff

hee-hee.  thanks, jeff.  i guess you won’t be here for caleb’s one year party?  we’ll make sure he knows he has his own websites.  🙂  so, when he gets older and asks me why he got websites for his birthday, i’ll just tell him that these are the kind of gifts you get when you have a nerdy dad and all of his friends are nerds too.
yvonne  🙂

Is my son going to be a nerd or geek too?  Or, is he going to be normal like his mommy?  🙂

We just spent the last 3 days on the Big Island with Bel, Stan, & baby Noah.  Here are some highlights and funny moments. 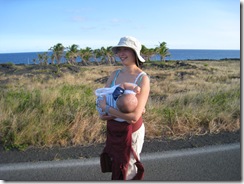 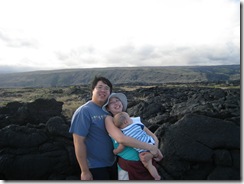 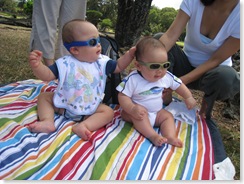 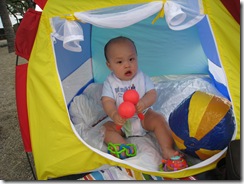 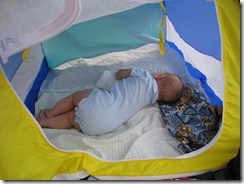 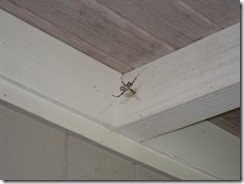 So, Chris takes Caleb to our local grocery store here (Tamura’s) by himself.  He wants to give me some time to rest since I haven’t been feeling well since yesterday.  All we really need is some water, and maybe a little bit of something for lunch.

I wake up from a nap wondering where my hubby and baby are.  I call them.  Chris starts laughing on the phone and tells me that Caleb had a poop explosion… a diarrhea one. Caleb has been having diarrhea since starting antibiotics last week (he had been sick for over 3 weeks).

Chris comes home carrying baby Caleb in only a diaper.  His purchases = diapers + baby food (peas and prunes).  Chris’ white Bucks t-shirt is spotted with brown liquid poop.  I couldn’t stop laughing.  Chris forgot to take the diaper bag with him, so he had to buy diapers there.  He carried dripping poopy Caleb thru the supermarket to buy diapers.  He didn’t have the hands to carry a big jug of water, but he could hold peas and prunes baby food jars.  Hahaaa.  So, are we really going to be feeding prunes to Caleb after he’s just had a diarrhea explosion?  Hahaha.

Caleb came home with a big smile on his face.  He had fun with his daddy.

Awh, too bad I didn’t take any pictures of Caleb’s poopy clothes or Chris in his poopy shirt.  You’d be laughing too.  Here’s a cute pic of Caleb in his sunnies, hat, & New Zealand swimwear. 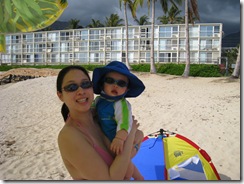 I’ve gotten too lazy to come up with a good name, so it will just be this.

Caleb is starting to hate the car again.  We don’t know if it’s the car itself, or if he’s not feeling well, or he simple chose to be whiny and cry-y, but he is.  It doesn’t help that we live out in the boonies, where everything is at least 30 minutes away.  It’s hit or miss with this boy now in the car.  And it’s usually a miss.  We now have to both sit in the front just so that he won’t think that we will take him out of the seat.  If his crying were only softer, maybe we wouldn’t mind it so much.  But boy, does Caleb have one good set of lungs.  Must get it from mommy.

Caleb had his first dip in the pool the other day.  And he had his first swim in the ocean yesterday.  That’s his pale chubby father holding him. 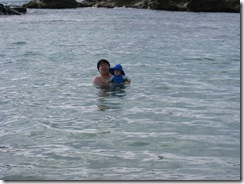 On that same day we went swimming, we saw a couple of humpback whales just outside our place.  You can see in the distance the whale blowing out air. 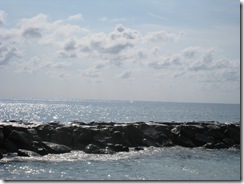 Here’s the beautiful sunset from our place. 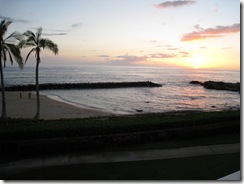 Daddy got a little ambitious on our rest day and wanted to take a short stroll to L&L for a plate lunch.  That stroll turned out to be much further when you’re actually walking.  We stopped at McD’s instead.  Great idea.  You see this half-eaten apple pie… 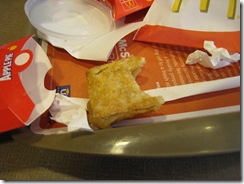 Yes, it’s fried.  And I thought these things only existed China now.  The only other thing I could notice different about McD’s in Hawaii is that they serve saimin.  Saimin?  No Taro pie?  No pineapple pie?

I can post pictures of my sexy wife in her swimsuit, but I won’t.  That’s for me and me alone!

We drove out to PCC today.  Not Pasadena Community College (Caleb was confused as well since he goes there every week), but Polynesian Cultural Center.  It’s a long drive.  For those of you who don’t know, Hawaii doesn’t have a lot of roads.  There’s one main road that goes around.  You can check out the map.  So we’re staying out in Waianae on the west coast.  If you look, North shore isn’t very far from us.  True.  We learned in geometry (or maybe even earlier) that the closest distance between two points is a line.  If you look even more closely, you can see that there are no roads from the west coast going anywhere but south.  So you must head south, get on the 1, then go back up north up the 2 in order to get to the north shore.  PCC is over in Laie, which is even further away.  So it’s quite a drive. We had to time it so that 90 minute drive coincided with Caleb’s nap.  Remember earlier how we said he wasn’t liking the car and it was hit or miss?  Today it was a hit, baby! 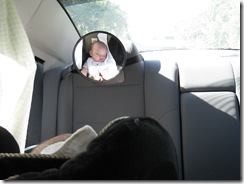 (You notice the interstate highways as well?  That’s the first thing I noticed when I saw a map too.  Interstate freeways in Hawaii?  What other state can I drive to?  Oregon?)

Driving along the road to PCC was quite nice.  We were driving along the north shore, and during the winters the waves can be nasty.  This picture doesn’t do it justice from what we really saw. 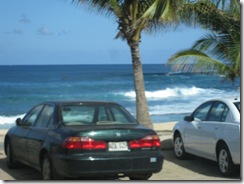 PCC was fun.  It was tiring with a baby though.  And the place is run by Mormons, so that’s not so fun.  But it was pretty entertaining.  I do enjoy learning about other cultures (although I didn’t learn that much today).  And it’s fun watching Yvonne participate in things like hula… 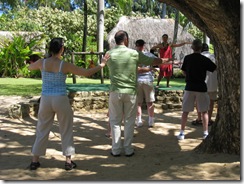 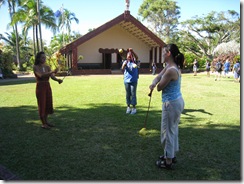 And Caleb playing with sticks…

Enough of that.  It’s time to sleep.  Yvonne isn’t not feeling well, so pray for all of us!  We’re going to need it if you want to see more of us doing silly things.  Or if you only want to watch Caleb playing on the ground in our apartment, then don’t pray.  We would certainly appreciate the prayer though. 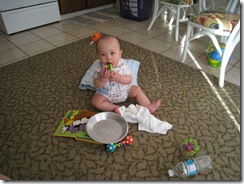 For those of you who don’t know, we’re in Hawaii now.  Before we came on the trip, we decided that we’re not going to have Caleb on his set sleeping schedule, seeing how it’s 2 hours earlier here, and if we ever want to do anything at night, he has to break his sleep routine.  And I must say it has not been as bad as I expected.  Still it hasn’t been good.

The plane ride was good.  Caleb slept for a little over an hour during the 5+ hour flight.  He played most of the time.  We made sure to bring lots of toys. 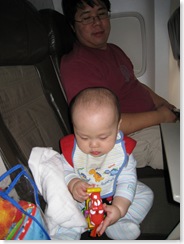 Caleb usually goes to sleep around 6-7pm and wakes up around 6am at home.  So here in Hawaii, that means he wants to sleep at 4-5 and wake up at 4am.  Not so good for him.  Not so good for us.  Since we’re changing his sleeping pattern anyways, we decided to keep him up the first night.  He went to sleep at 8:30pm local time the first night (that’s 10:30pm for him at home).  He was dead tired, and slept pretty well…  He only woke up once, but of course he woke up for good at 4:45am.  That’s a little tad early for us.  Again he slept at 8:30pm tonight. (He just woke up crying now at 10:52pm).  Hopefully he’ll have a good night the rest of the night.  Please God.  We like sleep.  We really do.

Even though Caleb still isn’t sleeping well, he’s trying.  He’s getting sleep wherever he can and without our help.  Much better than we thought he would do. 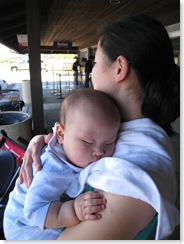 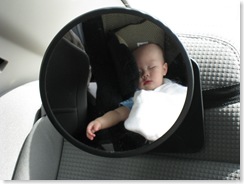 Even when he’s not getting enough sleep, Caleb has been good for much of the last 2 days.  He’s usually terribly grumpy.  But he can just sit in the stroller for long periods and not say much at all.  What a trooper. 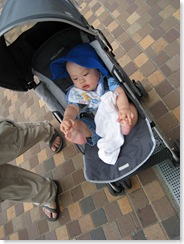 Of course, Caleb’s schedule isn’t the only one that is messed up.  Today we ate lunch at 3pm, not cause we weren’t hungry.  I wanted Hawaiian food.  But I couldn’t find any place that would be satisfactory for me.  What kept us from dying was eating sundaes and fruit and yogurt parfaits and McDs.  And of course our favorite, Peeps. 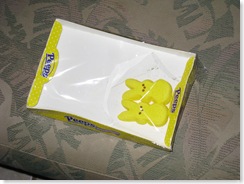 We did drove a lot today.  I, of course, was navigating, so that never turns out well, hence the 3pm lunch.  We finally found some authentic Hawaiian food at Wolf Gang Pucks.  Well not so much authentic, but it was still good nonetheless.

We spent much of the day in Waikiki.  I finally got my Hawaiian food for dinner at 9:30pm.  Yum. 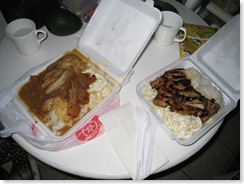 Other than that, we haven’t done too much.  Our condo is right next to the ocean.  We’re at the non-touristy side of the island.  The view is beautiful. 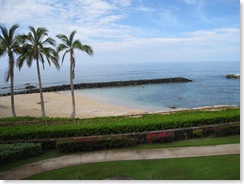