Caleb had his 1 year birthday party a week before his actual birthday.  His actual birthday was when we were at camp.  (By the way, whoâ€™s camera was used to take pictures at his birthday?  I have mostly video footage)

Caleb had a blast at his party.  Too much of a blast that he didnâ€™t get much of a nap in afternoon (only 30 minutes).  Of course if that wasnâ€™t enough, after his wild birthday party he goes another babyâ€™s birthday party.  2 parties in one day.  Letâ€™s just say that Caleb didnâ€™t sleep too well that night either.  I believe he woke up 6 times?

Update:
My wife informed me that he woke up not 6 times, but 8 times. 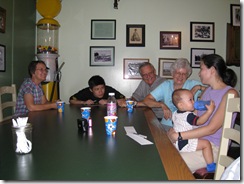 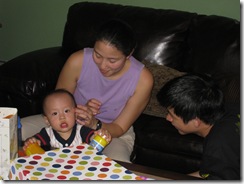 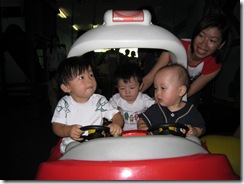 Caleb got some great toys for his birthday.  He had so many new toys he didnâ€™t know what to do with them all.  But his favorite toy (now) has to be his trucks.  He loves those trucks. 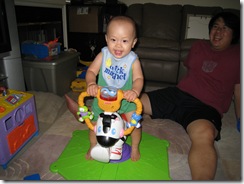 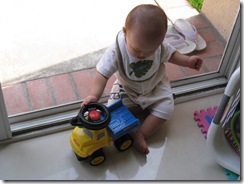 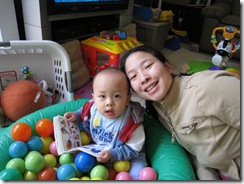 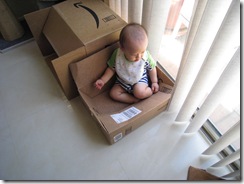 And sometimes he likes Tommy in the plain olâ€™ box. 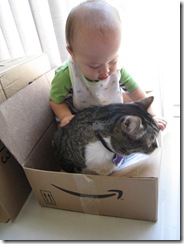 His actual birthday was more laid back even though we were at camp.  He had a bunch of people play with him.  He got to play with his trucks around camp.  And then on the night of his birthday, he woke up once at 8:45pm.  He didnâ€™t wake up again until 5:40am!  Almost 9 straight hours of sleep.  I must say I was amazed.  If he could do 9 hours every night, he would have some much more happier (and awake) parents. 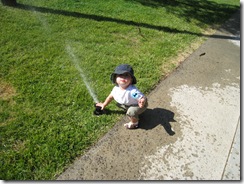